MALIN - between a rock and a hard place

It seems like a lifetime since the first journey, I always knew that it would take some time to build a momentum with areas. Some months later I found myself on relative home turf on the Ayrshire coast. Since the back end of 2014 I see the area MALIN out beyond the relative shelter of Ayr Bay every day. Out on the horizon from the coastal town of Troon where this artist is based is the mysterious rocky outcrop of Ailsa Craig. A volcanic plug of rock half way between Glasgow and Belfast.
The mysterious rock play tricks on you, fading further into the horizon as you travel closer to the coast or disappears all together in a distant sea mist.

MALIN  a new journey a new vessel. Due to the kindness of skipper Mark McCrindle the owner of the MFV Glorious a lobster boat working out of the small coastal town of Girvan famous in part as the once home of Alex Cubie one of the illustrators of Rupert Bear. 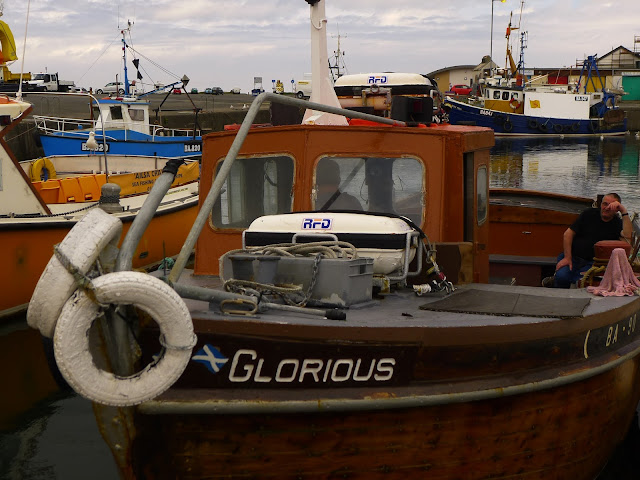 As this summer's heatwave scorched the the South of England the hot weather front from SPAIN brought heavy seas to the waters of the Forth of Clyde which prevented the journey out to the island. After several days of morning telephone calls to Mark on weather and sea updates the third day brought cooler and calmer seas and we were set for an early afternoon sailing.

Ominous dark clouds started to shroud the summer sun as my train rumbled along to the small railway station at Girvan. A short walk brought me down the small, but neat harbour. Slowly two by two the Glorious's passengers arrived for the approx  hour journey out to the rock that sits prominently on the horizon on this part of the Ayrshire coast.

Mark McCrindle our skipper , Girvan born and bred, lobster fisherman by trade started up the Glorious, her diesel engines slowly started to pull away from the Harbour's gravity out into the open waters of the Firth.  To the relief of everyone the heavy clouds remained land-bound and clearer skies greeted us as we slowly chugged towards this mysterious uninhabited rock.

We landed on the Ayrshire coast side of the rock at he small abandoned jetty. The only sounds to break the eeriness were the thousands on seabirds that call the Craig their home. The remnants of the islands industrial past still litter this the only accessible part of the island. Pulleys, rails and machinery slowly rusting on the rock outcrop


As my fellow passengers headed off in search of Gannets and Kittiwakes, my interest was drawn to the abandoned buildings around the Craig's automated lighthouse.  The detritus of human activity still litters the empty buildings, open to the harsh elements the interiors feel as bleach dry as the stony beach that runs down to the waters edge.

The island industrial past is also its future as one of two sites to source granite for curling stones. The last time stone was removed was back in 2013, and enough was taken to meet expected demand until 2020 so the islands solitude is assured for some years to come. The low lying part of the island is littered with broken stone and seems to provide ample nesting opportunities for those birds not looking for the "high-rise" option of accommodation.

Our short hour stay quickly came to an end and on returning to the boat we started our majestic circumnavigation of the rock. Thousands of birds filled the sky, telephoto lenses pointed into exact positions guided by what seemed decades of instinct. My fellow passengers without obvious signal would swing from one side of the board to another to catch glorious white gannets dart into the grey waters for their next feast of fish. The "far side" of the island sheer cliffs of nesting birds, the sky above us reminiscent of a Hitchcock movie.


As we slowly steered for home to the skies started to darken and bright summer sun became a memory. Taking a last look back we headed back to the Ayrshire coast.

As Ailsa Craig grew smaller and smaller and we headed towards the mainland the seas became choppy and the small fishing board started to swing from side to side as we rode the waves. Drizzle soon changed to more persistent rain. The sunshine that greeted us on the island seemed a distant memory as waves would periodically inundate the boat and soak us.
As we slowed and entered Girvan habour all my fellow passengers shared smiles even as we disembarked like a procession of drowned rats. It was fantastic to experience, a small wonder so close to the mainland shores.

A wonderful inspiration for the artwork called MALIN.

To experience this fantastic small adventure yourself the details are to be found on Mark's website.  http://www.ailsacraig.org.uk/
Posted by Ian at 05:33 No comments: