The first journey had come round so quickly after the initial enquiry which came out of a chance result of google search for Thames sailing barges. I had always loved the Thames barges and their
brick red sails. To me they are part of the mystery and legend of the Thames estuary, the earthy coloured waters, mists and salt marshes. A land of the hulks and Great Expectations.

Waving good bye to my wife and our cheeky dog Hector at Troon station I boarded the train to Glasgow to pick up my overnight bus to London, I was ready, if not a little hesitant for the first adventure, but excited to get started.  A journey that would take me from my home of nearly seven years in the West Scotland to a small picturesque corner of the East coast of England. It would take me to early afternoon the following day to get to Maldon the home of the Thistle, the only Thames barge built in Scotland some 120 years ago. A fine warm day greeted me, the Thistle moored within a huddle of barges and small commercial boats.
The barge is owned by local Maldon business Topsail Charters since 1987 and its to their credit that the Thistle doesn't feel or look her 120 years on the water. 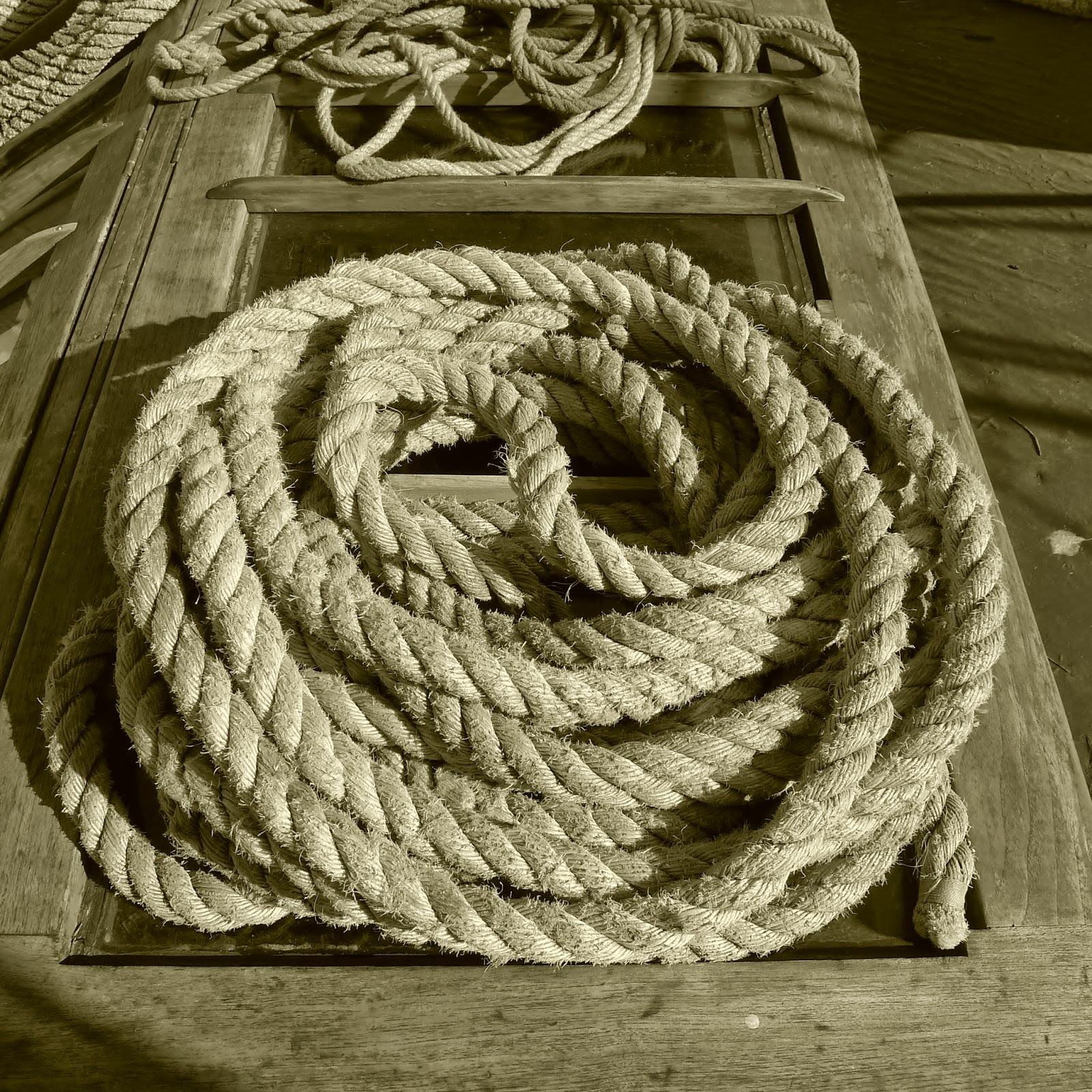 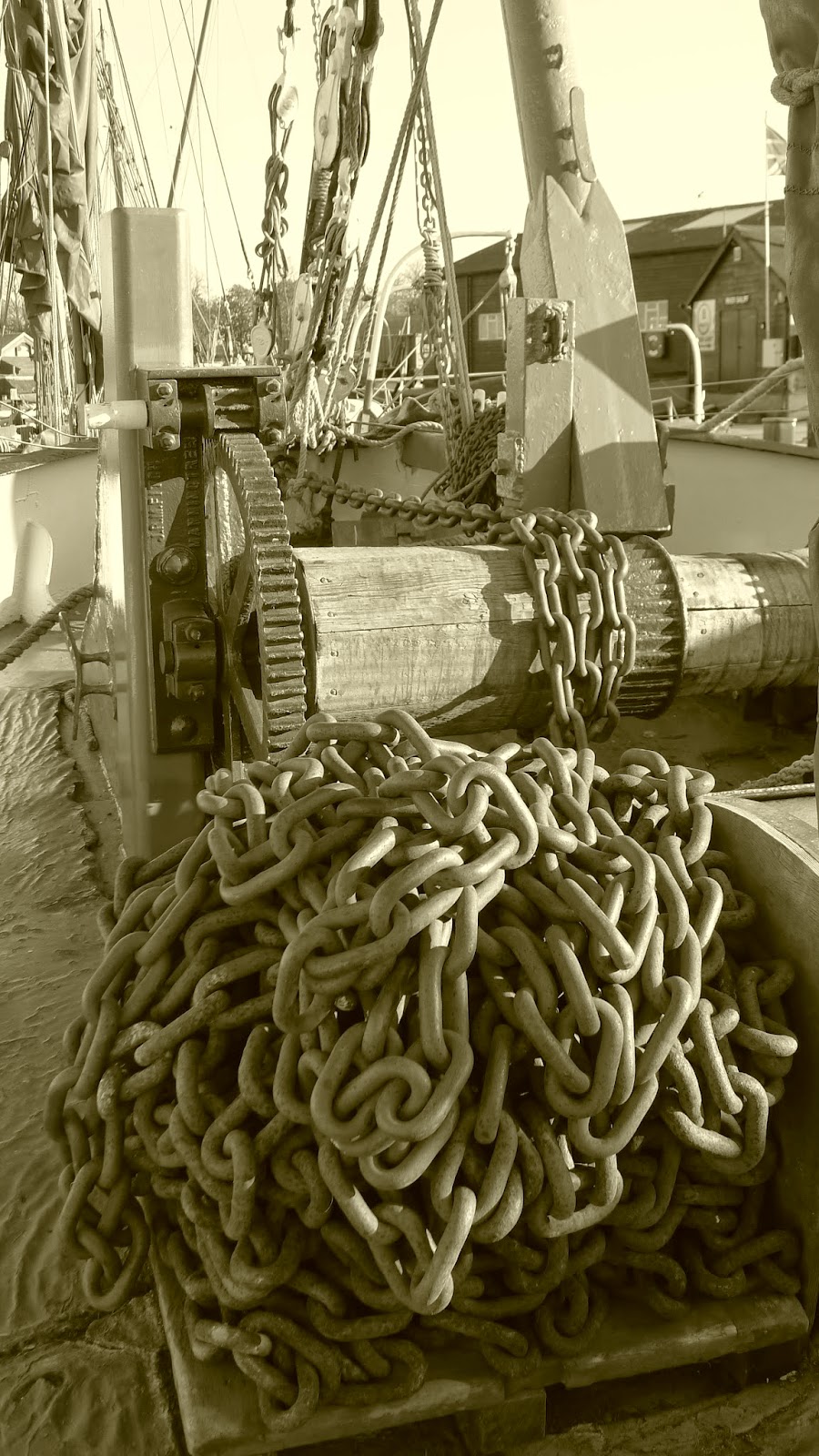 These ships were designed to handled by only two people. The crew for the journey to Ipswich were ex BBC man and journalist Rob, the Thistle's skipper who now spends his life sailing.  Reassuringly calm and naturally at ease on the water. His mate, Lyndon 21 going on 40, a part-time freelance photographer and regular member of the Thistle crew who has sailed the local waters of the Thames estuary since he was 11.  I knew I was in good hands.

After a day of press photos, a hearty supper and a relaxed pint at the Queens Head pub it was bed early to catch the 4.30 am tide.
Waking at 4am Rob and Lyndon already hard at preparing for departure, going on deck a cold , dark, heavy fog greeted me. A faint hazy light hung on the horizon as we cast off and slowly chugged up the estuary. Rob in the wheel house and Lyndon strategically positioned at the bow as look out for the marker buoys that would safely leads us out of the estuary. A confident shout from Lyndon "Red Buoy starboard three barges length" we headed out on the sailing channel almost on as much by “feel” and “instinct” as by the marker buoys leading us out towards the sea.

The fog laying heavy around us it was decided that we would anchor up for an hour and have breakfast and wait for the sun to come up. As the sun rose in the sky the fog and slowly lifted to reveal an beautiful clear sky.

As we headed out to sea a number of boats and platforms would reveal themselves from the haze including our relatively close encounter with the Radio Caroline ship the Ross Revenge an enormous trawler who found a new life as a pirate radio station in 1983.

Leaving the River Blackwater we motored up the coast past Clacton and Frinton-on-Sea towards the port of Harwich. As we headed past Walton-on-the-Naze pier I was asked to take the wheel as Rob headed down to the gallery to make a cuppa. Feeling the weight of the Thistle in my hands I steered, if not a little nervously along the coast. With no point to steer to other than on the SatNav and more importantly I was told by looking ahead I realised that “following the coast” is not as easy as it sounds. Keep a straight line became a zigzag course which would have made a World War 2 merchant ship avoiding U-boats proud.

As we started to see the cranes of Harwich port on the horizon, Rob felt there was enough wind to raise the sail. Everything on a Thistle is a sturdy and reassuring, which means "heavy" and maybe twice as heavy when your not experienced and know the techniques to use your body weight to its best advantage. One by one the individual sails took the wind and the regular chug chug of the diesel engine was replaced by the almost silent way we started to slip through the water.
As we reached the mouth of the estuary at Harwich you couldn't notice to feel the change in scale. Modern container shipping is on such a large scale that it can't help but dwarf even a substantial vessel as the Victorian Thistle.
Slowly but surely heading up the River Orwell towards Ipswich Port our destination. The entrance to the port is by the Prince Philip lock which was separates the marina from the open river.
Reaching the key side some 10 hours after we set up a little drained, but elated the first sea journey was completed.
Bags packed I left my companions who showed me so much kindness and headed off into Ipswich to catch my bus back into London. Arriving back at Victoria I was confronted by a chaotic 2 wheeled demonstration and struggled across the road into the terminal to greeted by the noise and crowds of a Friday night. With an hour to wait and with sea air replaced with that of diesel fumes, DELAYED popped up on the screen. My seated neighbour looked up smiled and said "don't worry it happens every week."
A restless uncomfortable night I awoke from my drowsiness to a wet and dark M74 , within the next couple of hours I would be back on the West coast and my own bed, drained, weary, but still buzzing from a great if only small adventure of the Shipping Forecast.

REMEMBER you can give to Macmillan Cancer Support through my Just Giving Page for the Shipping Forecast Project at :  https://www.justgiving.com/shipping-forecast

This week sees the first of 31 journeys and how apt that the first journey will be on the Thames Sailing Barge the "The thistle".  The kick off event in February took place at the Thistle Gallery in Glasgow's West End due to the tremendous support of its owner Carol Dunbar. The Thistle is the only Thames barge built in Scotland on the Clyde at Port Glasgow in 1895. I feel particularly feel privileged to be sailing on here first voyage of her 120th year. 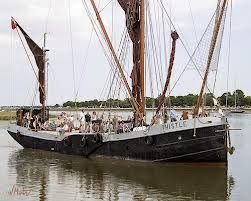 This journey is particularly special since the Sir Andrew Motion, Poet laureate until 2009 has agreed to contribute to the Shipping Forecast project with this beautiful verse.

What bending sea-grass knows
and the herring gull shouts aloud
is the same word the wind blows
and the sunlight dissolving cloud.
© Andrew Motion.

I am due to travel down to London tomorrow night via Glasgow and with the kind support of First Group (Essex) and National Express I will hope to be in the atmospheric port of Maldon Thursday afternoon. With only 3 of us on board we are due to sail on the 0430 tide to Ipswich Port.
I due to leave London for Glasgow on Friday evening, so with all everything running smoothly I hope to back on the Ayrshire coast early Saturday morning. After 3 nights of not sleeping in a bed I suspect I will be ready for a lie down in my own bed.
Like all journeys the excitement is tinged a little with the apprehension of the unknown, but this is the first of many journeys and it will be good to be on board a boat after so many years on Terra firma.
With sketch book, pencils, camera I look forward to posting the first of many visual records of this first of many adventures around the Shipping Forecast.

Signing off with lots of pictures to come.

Troon, Ayrshire coast. Scotland.
Posted by Ian at 03:15 No comments: