The sleeping giant Bay of Biscay

For those of you who have followed so far on this journey I have focused on one region at a time, but as health, and the day job has got in the way I looked for options where I cross a number of regions in the one journey. Time for a bit of catch up as time waits for no artist.
With the great help from Brittany Ferries I decided to journey from Portsmouth to Santander in Spain. This journey would take me around the coast of France across the infamous Bay of Biscay to the holiday resort of Santander.
The two day sea journey would take me across WIGHT, PORTLAND, PLYMOUTH and BISCAY, 48 hours of ferry journey.
Like many of these journeys the whole plan was based on smooth linking of public transport, with only the smallest margin for error. The unexpected illness of a passenger on my first leg nearly scuppered the whole plan, but with the gods on my side I managed to leave my home town only 20 mins late as I headed to another overnight to London.
Arriving at London's Victoria early Sunday morning couldn't considered as one of life's pleasures, the hustle and bustle of coach stations is so different to any other transport hub. A combination of chaos and panic.
Out onto another coach, at least this time its directly to the ferry terminal.

Once checked in and on board I was ready for the 24 hour journey out to the north coast of Spain.  As the evening drew in the weather began to change, from the relative calm of the English channel changed to the roller coaster of the Bay of Biscay.  The slow rolling of a relatively large cruise ferry felt like sleeping on the belly of a snoozing giant.
The morning brought calmer, but wetter weather and as the coast of Spain slowly came into view as we now seemed to guide towards our final destination.

As we slowly headed into the more sheltered waters around Santander the heavens decided to open
as we sailed past Cabo Mayor lighthouse.

Once docked we had 90 mins to explore the town of Santander before the homeward departure back to the UK.  If seemingly by magic the rain stopped and the sun made an appearance , if a somewhat brief one.

I headed to the wonderful Santander Cathedral which predominantly dates back to the 12th Century. 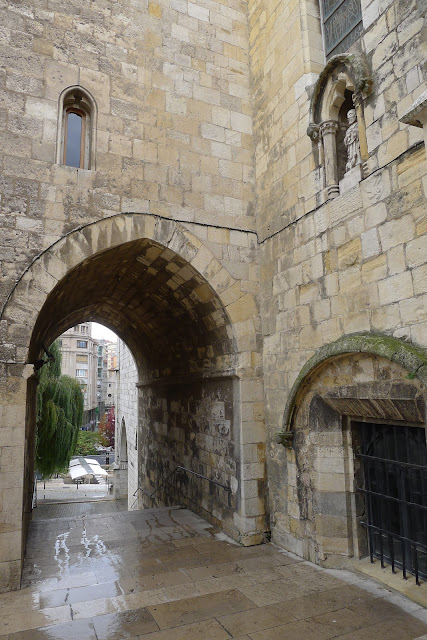 Away from the bustle of the main part of the town it was quite and restful antidote to the ferry of eager holiday makers.


Santander main thoroughfare is blessed with interesting buildings which I suppose are ignored by the busy shoppers.
As it was soon time to return to the ship the sun came out and the sea front took on a whole new look.


So it was back to England and the 24 hour journey back to Portsmouth harbour. As the ferry docked back at the terminal in mid afternoon it would be another overnight journey back to Scotland.

From the pitching of the ferry in the Bay of Biscay to the slow rumble of the coaches that brought back over the Scottish border. Two days of slumbering giant of non stop travel came to end and the achievement of 4 regions in 3 days.  Onwards and upwards to the new journeys in 2018.
Again I would like to thank Brittany Ferries for helping me to get to Spain and back.