I made a decision on this journey to do something very different. From the outset I had made the serious rod for my own back to sail on various sea going craft on each region.  I decided to break that rule for the one and only time to truly get my feet wet by walking across the sands and water of Morcambe Bay.


I have always been fascinated by estuaries and to walk across across the mysterious and very dangerous Morcambe Bay was an excited opportunity too good to miss.

The rivers Leven, Kent, Keer, Lune and Wyre drain into the Bay, with their various estuaries making a number of peninsulas within the bay. Much of the land around the bay is reclaimed, forming salt marshes used in agriculture. Morecambe Bay is also an important wildlife site, with abundant bird life and varied marine habitats, and there is a bird observatory at Walney Island. The bay has been fished for its rich cockle beds by locals for generations.
The only safe way across the Bay is to walk with a guide, the current Queens guide to the sands  is Cedric Robinson MBE who became the 63rd guide in 1963. Cedric has been guiding charity groups across year in year out, weather permitting for the princely some of £15 a year.


To join a walk I decided to gate crash another charities 'party' as all walks are linked specific charities.

***********************
Galloway’s Society for the Blind was established in 1867 and since then has evolved and developed to provide a range of services to over 7000 Blind and Partially Sighted people across Lancashire and Sefton and a range of talking newspapers available nationally.Operating from four Sight Advice Centres and with support groups throughout various towns and villages, the Society strives to reach out and provide an accessible local service. We pride ourselves on being big enough to cope but small enough to care.

To find out more about the fabulous work this charity does check out their website http://www.galloways.org.uk/
*********************
Even though the purpose of this project is raise funds for Macmillan , its good to spread the good around and as an artist I am acutely aware of the value of my eyesight.
Luckily this project was one of the few that I could do there and back in a day and this time, no overnight coach journeys.  phew!!  Getting down to Cumbria was an early start , not long after to 5 to get there for the start around 10.30 am.

After some decidedly dodgy train connections I managed to get to the scenic bayside village of Arnside to register and get the obligatory pink Galloways t-shirt.
We set off along the side of the bay for some miles , before we headed towards the sands.

A brief stop to have a bite to eat and a drink shoes and socks came off for the long walk across the sands and water. It wasn't until much later that what I imagined would be a soft soothing sand under your feet would be like hard impact textured clay.  Feet size like an extra of Lord of the Rings is small price to suffer for your art and good cause.

As we spread out across the bay looking back inland you realise how serene this part of Cumbria is away from the hustle and bustle of the usual tourist spots.  Without the marked out route by Cedric we would be at the mercy of quicksands and hidden water pools. Each route is set out for each journey and marked with beautiful laurel branches.
Out towards to the River Kent that across the bay which would feel like a raging current up you knees. Walking in such deep water .. constant thought Don't fall, don't slip.  Reliving the nightmare of slipping and submerging myself, phone and camera ceased to materialise and we all made though, walkers , children and numerous four legged friends.

After some 4 hours of working we moved to the sticky black mud of salt marsh as we entered the last phase of the Bay walk.
Soon we would make the tiny station of Kent's Bank and the beginning of the return journey of back to Scotland.
I would like to thank Pam Davies, a local who kept the artist company across the bay with her endless locals information. Little did I know that I passed through Carnforth Station on the way back to my connection in Lancaster where the wonderful wartime classic movie was filmed.  One of the most famous features of this film was the station clock which is still a feature of the station.

The clock just managed to come into view when the train pulled into the station.

Soon we were rolling into Lancaster to connect my East coast line train back to Scotland. With time on my hands I managed to get a quick look at medieval Lancaster castle.

The homeward back to Scotland, that was certainly tiring and at the same time rewarding .. definitely a brief encounter with the Irish sea.

White Cliffs and more... I can see France from here 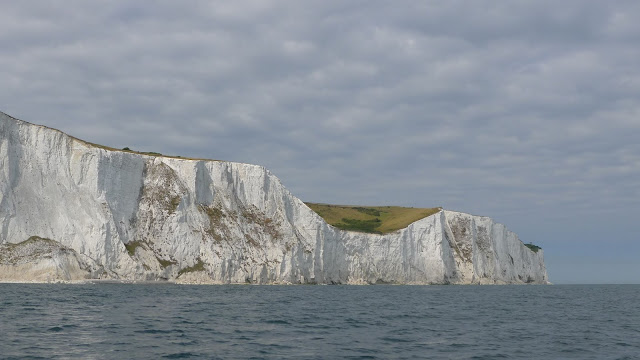 Back to the sea a little later in the year than I would have liked, but often logistic setbacks and huddles have become the nature of the beast.

This trip was planned to be one of the most intense ones yet, the west of Scotland to Dover and back in less than 36 hours. Just under a 1000 miles of travel mostly overnight.
This speedy dash across the UK would take me most of the length of the country and from one coast to another. The plan is travel out on a scheduled seal watching trip with Dover Sea Safaris based out of the busy town of Dover.
Early evening boarding the train from my home in Troon I was not looking forward to the two successive nights of overnight coach transport. The now familiar morning in Belgravia's street always coming quicker than you expect for an over night stop /start journey of comfort stops and motorway services. Today the streets of London already heating up early, another blistering day of this years unexpected heatwave.

From one bus to another in the chaos that seems to surround Victoria Bus Station I was on the second leg of my journey heading down through Kent, the Garden of England. Ominous dark clouds filled the sky. This wasn't on the plan, rain??  I was praying to all the travel gods clouds clouds go away!  The irony of travelling as part of a project based on the shipping forecast is that the weather is the ultimate arbiter of each journeys success. Most of the time you are in the hands of the vagueries of public transport, but anything involving the sea, comes down to  good weather in the end.

As we rolled into Dover the weather gods seemed to have looked kindly on me and the rain had held off and the calmness of the hot summer's day was only disturbed by the hint of a strong breeze picking up.  As I had the weather gods on speed dial I was hoping that the weather would stay 'boat friendly'

I was walked down to the promenade the iconic white cliffs came into full view loomed out of the horizon like a giant book end at one end of the town.


Heading into to report my arrival to the tour company ,a young enthusiastic lot this Dover Sea crowd, all wetsuits and chandlery and buckets of enthusiasm.  Soon kitted out in weather proof jackets and life jackets we headed down to the marina to board the beast of the inflatable RHIB that would take us up a sizeable section of the Kent coast to the tranquil estuary of the River Stour and its current seal colony.


Slowly heading out of the harbour we were halted by a leaving ferry, it is easy to forget that this is one of the congested stretches of water in the World. Once the ferry cleared Dover port on its way to France we headed on our way picking up speed as we skirted the Kent coast. As we left the white cliffs behind us as we headed past Deal pier and Sandwich bay on our way to Pegwell Bay not far from Ramsgate.

The great thing about this trip is was one of contrasts , the high speed turns and manoeuvres and then slowly coming to rest of the River Stour in Pegwell bay as you slide slowly down with the tide past the resting seals with their pups.
The estuary used to be a World War One port, so totally out of bounds to anyone but the MOD. The port shut after the wars, but the land remained in MOD hands and subsequently was never developed. It became a nature reserve by accident.
As we slowly slid out of Pegwell Bay back into the against the head wind we were warned of a more bumpy ride on our way back to Dover. 'Its just like riding a horse'  apparently.

Out into the English channel we picked up speed and the power of the RHIB opened up. nothing like being more than a foot off the water.  The return journey took us closer to the shore where you could marvel at the beautiful coloured houses along the Deal shoreline and the beached wooden boats along its shingle shore.
Veering away from Deal pier was more fun-ground ride than nature trip and once again the powerful chalk cliffs reared up above us .

You only get a sense of the scale of the white cliffs when your at sea and you can clearly see why they are a Great British icon.

Back into Dover Marina and almost time to leave again for London.
Just time for a well deserved fish and chips before back to the hustle and bustle of London streets.

Back onto another overnight coach, hardly seems 24 hours since I did this, oh yes, it was only 24 hours since I last did this. Soon the delights of nature would be replaced by the drowsy blur of brake lights and the pale hue of restaurant windows as we stuttered out of the congested heart of London onto the misty now cold expanse of motorway.

I would like to thank the team at Dover Sea Safari for an exciting and informative journey along the Kent coast. Well worth the trip if down that way and you have the sea legs for it.. https://www.doverseasafari.co.uk/