The not so graceful swan

The project continues at a slow pace for 2016 but will burst into new life as we enter into a new year. I was surprised how my brief encounter with the grim reaper would throw a ship size spanner into the works along with keeping the artist on a regular income.

As the not so graceful swan glides on the surface the feet of planning continue to make headway as leave one year and into a new.

Due to the kindness of BBC Humberside's presenter Phil White I was given an opportunity to tell the Shipping Forecasts story on live radio. As we have noticed from previous entries that wasn't the first time on the radio, but in the past we had the opportunity record the interview and edit out those "I forgot my lines" moments. While you unexpected sit there on the sofa waiting for the the proceeding record to finish all sorts of thoughts cross your mind, will I lose it? will talk utter nonsense?  Those who know me know I'm quite good at that.  As the record faded out my introduction to live radio was a remarkably calm and relaxed affair and I managed to share my vision and story with some unexpected ease.
The challenge was to get some local help in the two Sea areas local to the BBC Humberside audience TYNE and the obvious one HUMBER .

Within an hour or two of the interview I was offered transport into both of those areas off the Yorkshire coast.

The first of those was an opportunity to take to sea on a historic Yorkshire Coble, a traditional fishing boat of the North East of England. A craft that was made famous by the Victorian heroine Grace Darling who with her father sailed out in treacherous seas to save the crew of the 400 Ton Steamer the "Forfarshire" I'm personally hoping for a little less adventure when I join the crew of the boats the Three Brothers or the Gratitude. #

I'm particularly looking for to taking to the sea in 2017 into the HUMBER region aboard this beautiful boat or the Three Brothers shown below;

As always the project has been subject to the vagaries of the weather, particularly in the winter.  With the generosity of Colin Shore and his Jeanneau Merry Fisher boat. I look to make the journey from Whitby to the the historic sea part of Staithes, a long time artists colony which will take me into the TYNE region.

Other journeys are at tentative stage : WHITE and PORTLAND will be completed in 2017 due the generosity of accommodation from a long standing customer of mine Pam Du Val who is lucky to live on Portland Bill.

These are just the first few of many, 2017 will be a major catch up year for the artist and the journeys that will follow to put the show back on the road again.

The search for new music continues with the kind support of the American singer  Sally Ellyson who I have discussed using the beautiful song  http://lyrics.wikia.com/wiki/Hem:In_A_Barrel_At_Sea

A beautiful and poignant song that would be a fitting addition to the project.

An artist's boat ran aground - the tide has slowly returned.

After months absence away from the project the artist is back to working on the next set of journeys on this enormous venture across water and paint.
I had expected that the winter months would be quieter due the uncertainty of the weather, but I couldn't expected the turn of events at Christmas. I suffered a heart attack a week before Christmas, frighteningly unexpected for a reasonably fit 54 year old with none of the risk factors other than a very stressful life before becoming a full time painter. It has been a long road to full fitness and after two heart operations it was prudent to put the project on hold until I felt confident of travelling out to sea.  It is a well worn cliche, but not without truth that after an event that your heart stops you take stock and reassess your life and look at the World with new eyes.  During the recovery period  I have never painted so much and expanded my creative horizons. My senses have been more acute, whether this is "real" or a psychological consequence of my "cardiac event" I may never know, but the effects are refected in the way I look at the art , including my own.
Even though I made the decision to not to travel whilst building up my strength and confidence to travel alone I have continued to work on the music side of the project. I have recently been offered a beautiful work by the contemporary composer Poppy Ackroyd. A video of this work "the Glass sea" is included:

A number of other International artists have expressed an interest in the project and more names will be revealed as and when they come on board.

I have recently finished the project work for the Cromarty area. An initial decision to not include geographic markers in some of the painters has been abandoned as in some cases a feature will encourage sales which is the ultimate purpose to raise funds for Macmillan Cancer Support.

I made a decision a stormy piece for the CROMARTY region as it seemed in keeping with the often wild and unpredictable seas of the Northern coast of Scotland.  The Cromarty piece is also unusual in that I have worked in mixed media, adding detail and structure with crayon.  Each piece for the project is not only a journey of geography, but also a creative one and I am sure it will develop over the life of the 31 regions.

I am currently working on the painting  for the FORTH region and will be posting an image in the next post along with some news of further journeys in the coming months.

This update is only a short one, but it was meant to reassure supporters of the project that the rumours of the Artist's demise have been somewhat exaggerated and things are back on an even keel ( to strain the boating metaphors )

Another BIG BIG Thanks for all those who sent me good wishes, prays and thoughts which helped enormously in feeling a new fitter version of my former self.

REMEMBER you can still give via my Just Giving page , no amount too small for this amazing cause. 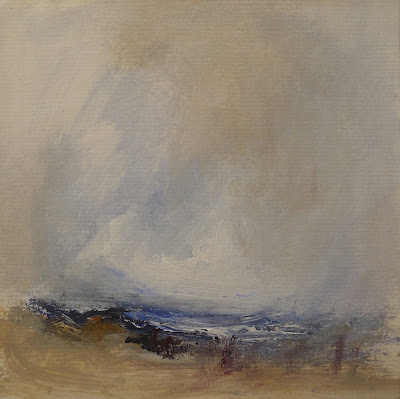